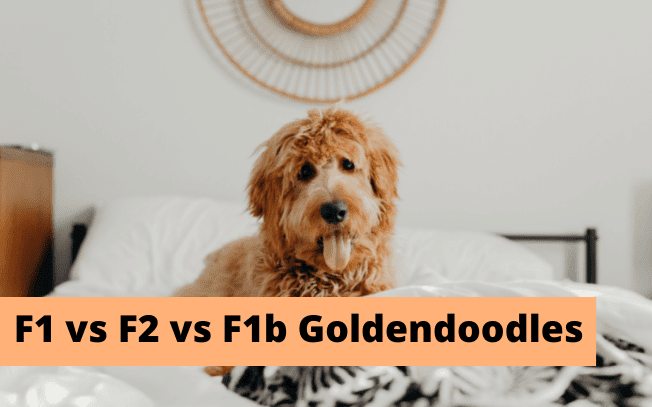 If you’re a dog lover who loves cute, furry pets, you probably know about Goldendoodles. Did you know that it’s a “designer dog” that has come into being due to crossbreeding? That means it is a hybrid of two purebred dogs. These cuties come in different varieties, the most popular being the F1 Goldendoodle, F2 Goldendoodle, and F1b Goldendoodle!

Let’s find out more about one of the cutest dogs in the world—and the traits of different Goldendoodle generations and varieties.

What is a Goldendoodle?

If you talk to dog breeders, they’ll tell you that a Goldendoodle is a designer or a hybrid dog breed. What does that mean?  A Goldendoodle has two purebred parents—the purebred Poodle and the purebred Golden Retriever. That means it is not a real breed of its own. It is a crossbreed and is becoming more and more popular.

As half Golden Retriever, a Goldendoodle, or Groodle, are sharp and affectionate. They also do not shed a lot and are healthy dogs. You can say that these dogs inherit the best qualities or traits from the purebred parent dogs. For first-time dog owners, a Groodle will make a great pet for you. It won’t give you much trouble and be your loving companion.

Goldendoodles come in a wide range of sizes, depending on the variant of Poodle it has as its parent—Teacup Goldendoodles, Miniature Goldendoodles, and Standard Goldendoodles. This texture is a trait that Goldendoodles inherit from Poodles. It’s more than just a warm family dog. Goldendoodles are perfect as guide dogs, sniffer dogs, therapy dogs, and service dogs. That’s because they are agile and intelligent dogs.

Goldendoodle’s breed was first developed in the nineties. You can say that among all the other designer dogs, this breed is the youngest. The Groodle litters you see today are the first generation Goldendoodles. These are social animals—and they don’t make great watchdogs.

They love to be active and enjoy space, which is why they find it challenging to live in an apartment. But if you can provide them with a yard, you can keep them in both country and city settings. But make sure they are not living outside or inside a kennel. That’s because they need to be in human contact constantly.

When you talk to a dog breeder, they will tell you that Goldendoodles are of three types—F1 Goldendoodle, F2 Goldendoodle, and F1b Goldendoodle. The “F” stands for “Filial”. It denotes the generation of the dog. In Biology, the word “Filial” refers to the offspring of a cross.

Now that you know of the three types of Goldendoodles, it will help you to understand that each of these varieties presents slightly varying characteristics. So it is time to understand what traits you can experience from each Goldendoodle generation. Let’s take a look at them individually!

The F1 Goldendoodle, the first generation of the breed, is half Golden Retriever and half Poodle. This is the generation that people usually think of when it comes to Goldendoodles. Even with 50% of the two specific dog genetics from parents, this crossbred dog’s genetics can vary vastly. Accordingly, the puppies may come out quite different from each other.

For instance, F1 Goldendoodle puppies may differ widely in terms of their coat. They may have a wavy coat, a curly coat, or a smooth coat. It depends on whether they inherit the trait from the Poodle parent or the Golden Retriever. This dog is found to be healthier than a purebred dog, which is why it is referred to as the “Hybrid Vigor”.

Let’s understand how this works. Due to excessive inbreeding amidst purebred dogs, genetic issues are pretty standard. But an F1 Goldendoodle potentially inherits the best genes from both parents. So, it usually ends up with some common health problems instead of significant and uncommon health problems.

All dogs shed fur to some extent. Plus, it is hard to determine precisely how much a crossbreed dog might shed. As for an F1 Goldendoodle, it usually doesn’t shed a massive deal as it is not susceptible to allergic reactions. But its shedding will depend on which parent it leans towards. Poodles are low-shedding dogs, and Golden Retrievers are high-shedding breeds.

An F1 Goldendoodle looks adorable with fur of different shades. The coat color will depend on the parents. The influence of Poodles gives Goldendoodles red, black, ivory, or cream coats. On the other hand, a Golden Retriever parent gives the dog light golden or reddish fur.

This helps to produce a light-shedding or almost non-shedding dog. This type of puppy is a Backcross bred one. Hence, this generation is called F1B, where F stands for Filial and B stands for Backcross. These extremely light shedders have many healthy traits that they inherit from the Hybrid Vigor parent. But with every subsequent generation, the Hybrid Video traits continue to fade.

The Golden Retriever is a high-shedding breed but doesn’t develop severe allergies. On the other hand, Poodles are hypoallergenic, and they don’t shed much at all. As a result, the F1B inherits the traits from both parents and has a primarily non-shedding coat that requires some grooming and brushing.

Poodles have a variety of coat colors like black, apricot, cream, white, etc., while Golden Retrievers may have coats of different shades of golden. So, the fur of an F1B Goldendoodle can come in a variety of colors, including black, red, brown, apricot, merle, and parti. Due to the genetic dominance of Poodles, F1B Goldendoodles have a curly or wavy coat instead of smooth fur like a Golden Retriever.

An F2 Goldendoodle is usually not chosen for breeding, and F3 or third generation Goldendoodles are extremely rare. That’s because the F2 generation itself is pretty unpredictable. So it is hard to tell what kind of coat type, health conditions, shedding habits, etc., will shedding the puppies will have.

But you will need to spend some time taking care of an F2 Groodle’s coat as it will shed a little more than the previous Goldendoodle generations, even though it is quite hypoallergenic. But it’s difficult to tell how much they’ll shed. It is also hard to predict what the coat of an F2 Goldendoodle puppy will look like. Smooth, wavy, and curly coats are all common among F2 Groodle pups.

The F2 puppies are incredibly energetic, and they make great pets because they offer a lot of love and love company. So they can be a great member of any family. They also make excellent service dogs and therapy dogs. You should also note that their susceptibility to allergies is light to moderate. So an F2 Goldendoodle is a perfect choice if you want a playful addition to your life to keep you company.

However, the Hybrid Vigor traits allow the F1 Goldendoodle to have more minor health issues as it inherits the best qualities from both the Poodle and the Golden Retriever parents. Many breeders say that people mostly prefer F1B Goldendoodles because of the wavy or curly coat and because they are more hypoallergenic dogs.

However, you will have to take care and groom the non shedding coat of the F1B dog. Otherwise, the fur will start to tangle and get matted. You’ll have to cut the hair of the dog every 8-12 weeks. On the other hand, F1 Goldendoodles do not need as much grooming. In addition, they have the Hybrid Vigor trait of good health. Such characteristics are more dominant in F1 Groodles than F1B Goldendoodles.

If you are prone to allergies, it is better to go with an F1B Goldendoodle. Allergy sufferers who experience mild allergies get no reactions when they live with F1B Goldendoodles. However, because of the hypoallergenic coat, they are more expensive than first generation dogs. Plus, don’t forget the grooming costs, because their coats are much curlier than the F1 Goldendoodles’ coats.

One of the reasons an F1B Goldendoodle is chosen by pet owners, despite its high price and regular grooming needs, is the hypoallergenic coat that is usually fleecy and wooly. They don’t look much like the Golden Retriever parent. Plus, they are also relatively small. If you are looking for more resemblance to Golden Retrievers, you can go with a second generation Goldendoodles.

Unlike an F1B Goldendoodle dog, F2 Goldendoodles, a crossbred dog with two F1 Goldendoodle parents, has a lower possibility of a hypoallergenic coat. They also shed more and may have curly or wavy coats. You can also expect it to have the same genetic defects as the parent breeds.

F1B Goldendoodles may develop hip dysplasia and other such problems only if any of the parent dogs have it. A reputable breeder constantly tests the parent dogs, especially the F1 Goldendoodle, to detect such diseases.  The chances of genetic diseases are more in F2 Goldendoodles because, with more crossbreeding, the potential for diseases in future Goldendoodle generations becomes more.

F2 Goldendoodles, however, need far less grooming and effort. They cost you less, be it at the time of purchase or while taking care of the dog. They make great pets for both new and seasoned dog owners. Hybrid Vigor traits are not strong in them, but they do offer the chances of healthy dogs from a strong lineage. You will just need to contact a reputable breeder.

F1 Goldendoodle pups present more genetic diversity compared to F2 puppies. This means that they will have lower chances of health issues in the long run, especially if you look at the conditions that develop due to inbreeding. They are predictable, and the traits are usually closer to the Poodle coat qualities. The first generation Goldendoodles are also easier to breed than the second generation.

However, the only issue can be if you are looking for a Goldendoodle that’s more like a Golden Retriever than a Poodle. This is where F2 Goldendoodles have an advantage because they have the fun personality trait of Golden Retrievers. But then again, if you are prone to allergies, F2 Groodles might be a risky option for you.

Even though F1 Goldendoodle dogs are more hypoallergenic than the second Goldendoodle generation, no dog is entirely devoid of qualities that trigger allergies. You should remember that the allergen causing problems can be present in the fur as well as in the saliva. You can look for dogs with curly or fleecy coat types. These coat types shed less and are less dangerous.

All Goldendoodle generations and varieties are different from an average dog—be it the appearance, chances of genetic disorders in the future generation offspring, grooming needs, or price. It all depends on whether the pup leans towards the Poodle or the Golden Retriever. So take your pick—and bring home a lovely Goldendoodle puppy! Don’t forget to check out our list of Goldendoodle haircut to see all the many different ways you can groom your Goldendoodle. 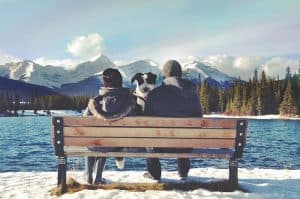