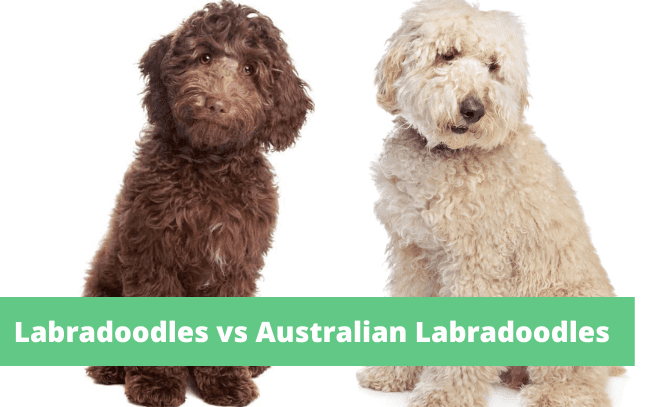 While Australian Labradoodle and Labradoodle puppies look quite the same, you’ll be surprised to see some significant differences between the two.

Both these mixed dog breeds have adorable faces, big puppy-dog eyes, and cute personalities. But which one’s the perfect puppy for you?

And are these Labrador crossed breed dogs suitable for first-time dog owners?

Keep reading this blog to find the answers. In addition, I’ll also cover physical features, traits, diet, health conditions of both the Australian Labradoodle and Labradoodle.

What Is An Australian Labradoodle?

It’s an offspring from six different pure breed dogs, but an Aussie Shepherd isn’t a part of it. The Australian Labradoodle is actually a mix between:

People bred Australian Labradoodles for the same reasons as the other Labradoodle puppies, that is, for hunting and to keep as watchdogs.

Even now, people keep Australian Labradoodles for service work. But, it is not as popular as other Labradoodle breeds.

Predicting the coat and color of the multigene Australian Labradoodle is difficult for obvious reasons.

It can have a wavy or curly coat. The dog fur can either be fleece or wool. Again, these pups come in different colors like white, black, brown, apricot, or blue.

Usually, they have a solid color body, but sometimes patches of other shades are seen around the eyes or on the chest.

Also known as American Labradoodle, this is a mix between a purebred Poodle and a purebred Labrador Retriever. Labradoodles were also bred as service dogs because people with dog allergies wanted a hypoallergenic version of the Labrador.

Even though Labradoodles were bred before, they became more popular in the 1980s. Shortly after, they became a more common breed, and people started adopting them as pets.

Labradoodles have a very friendly, outgoing nature making dog lovers adore them even more. They are very loyal and affectionate towards their owners; hence people love keeping Labradoodles as pets.

Similar to Australian Labradoodles, predicting the physical traits of the American Labradoodle isn’t straightforward. Their traits depend more on which parent breed has a stronger influence.

Australian Labradoodle vs Labradoodle: What Are The Significant Differences?

I’ll take you through the primary differences between these Labrador Retriever crossbreeds.

The size depends on the size of the parent dogs.

The Mini Labradoodle weighs between 15 to 30 pounds, while the standard Labradoodles grow as big as 14 to 24 inches and weigh around 45 to 100 pounds.

Compared to this, the original Australian Labradoodle weighs between 30 to 77 pounds and grows between 17 to 24 inches tall. The size of the Labradoodle also depends on the Poodle’s size.

Differentiating these two breeds based on their features is a bit tricky. At first glance, both the Labradoodle and the Australian Labradoodle may look alike.

But if you look carefully, you’ll see that the Labradoodle breed mostly has solid color coats. They are found in various colors like black, white, cream, apricot, caramel, brown, and gold.

But in an Australian Labradoodle litter, you’ll see pups with mixed color spots and markings on their bodies, which is due to the mix of different genes.

As for the texture of the coat, the Australian Labradoodle puppy has a wool or fleece coat. The wool coat is curly, while the fleece coat looks a bit wavy.

The Labradoodle has a fleece coat, but their coat types change as they grow older. The influence of Poodle genes is more prominent when it comes to Labradoodle dogs. Most of these puppies have curly coats.

It’s an intelligent breed, thanks to its Labrador and Poodle parent. But due to the presence of Cocker Spaniel DNA, it has got a calm, composed attitude.

Aussie Labradoodles are obedient as they are always eager to please their owners; hence training them is fun and easy.

If you need a dog that keeps watch and is fun to play with, the Australian Labradoodle will be the perfect pup.

The Labradoodle puppy, on the other hand, is more outgoing and energetic. Therefore, Labradoodles are best for active families.

They don’t like sitting around doing nothing and require enough playing and activity time.

Due to their over-energetic nature, controlling them may get on your nerves at times, so they won’t be the best choice for novice pet owners.

Both the Australian Labradoodle mix and the Labradoodle do well around other dogs and children. They are not aggressive breeds, but they have the potential to get aggressive if not trained properly.

Also, socialize with them as soon as you get the puppy. Early socialization helps get along with other pets and children.

Because of the Doodle’s large size, Labradoodle dogs may grow pretty large, which can be intimidating, especially if you have small pets or children.

To avoid any unwanted incidents, keep a watch while your pup plays with your children.

Even though the Labradoodle dogs are more energetic than the Australian Labradoodle, they require an equal amount of exercise. Both these breeds need at least one hour of exercise, including walks and other basic dog exercises.

Go for a morning or evening walk with your pet. It can either be a long walk, or you could break it into two shorter walks. Aim for a minimum of 90 minutes of exercise a day.

Adding some playtime is a must for both the Australian Labradoodles and the standard Labradoodle.

These Labrador Retriever breeds yearn for the attention of their owners, so some playtime is a must so your dog doesn’t get bored and feel ignored.

As both the Standard Labradoodle and the Australian Labradoodles are very intelligent and clever, training them will not take much time.

Training them is super fun and interesting to watch. Go for some positive reinforcement training by rewarding your pup with treats, toys, or some simple praises. Doing so encourages your dog to behave in the manner you want them, and it’s the most effective way of shaping or changing your pet’s behavior.

Training also helps tame down their hunting or attacking instincts, which is essential when you want a family dog as opposed to a working/hunting dog.

The grooming needs of both breeds will depend on the coat type. Both dogs require regular brushing. The curlier the coat, the most often you’ll need to brush as a straight coat will likely shed a bit, but curly coats won’t shed as often. To prevent mats, you must brush frequently.

Additionally, trimming nails and hair is essential to keep your pup in the best shape.

You can look through our list of large hypoallergenic dogs to see which other breeds are low- to no-shedding.

And lastly, taking your pup to professional groomers every 4-6 weeks is best to keep your designer dog looking their best!

One of the benefits of getting a cross-breed dog is that they are less prone to genetic diseases than purebred breeds.

However, pet parents should be aware of the potential health risks the Australian Labradoodle and the Labradoodle may encounter.

On the other hand, the Australian Labradoodle is prone to developing hip and elbow dysplasia, Patellar Luxation, Progressive Retinal Atrophy, and Von Willebrand’s disease.

It’s impossible to tell whether your pup will develop any of these diseases as it ages. So the only way to ensure that you get a healthy puppy is by getting it from a reputable breeder.

Reputable breeders do the health checkups of the parent breeds before breeding. They only breed from parental breeds with no health issues, which is why you shouldn’t get your dog from any backyard breeders or puppy mills.

You can also consider adopting a Labradoodle from a Doodle rescue.

The cost differs from breeder to breeder. Reputable breeders charge more as they do all the necessary tests and vaccination to ensure you get a healthy dog.

Make sure to ask for all the documents regarding their health tests, vaccination certificates, etc., while buying your dog.

If you are lucky, you may find these puppies through a rescue center and get them at a much lower price.

Additionally, you need to consider other expenses like vet checkups, vaccination, food, toys, grooming, etc. You can consider getting pet insurance, which saves you from draining your bank account.

Both the Australian Labradoodle and the American Labradoodle are very adorable puppies and are great as companion dogs. Go through the differences well before deciding which puppy will suit your home environment the best.

Also, take proper care and spend enough time with your little pooch to ensure they live a long, happy life. If you still have any questions, drop them in the comments.

The Australian Labradoodle and the Labradoodle are quite similar in terms of temperament and nature. So they are perfect breeds for any dog lover. But if you prefer a quiet and more relaxed lifestyle, these dogs are not for you.

Both Labradoodles and Australian Labradoodles require plenty of grooming and exercise. They are easy to care for but are best suited for active families.

Do Australian Labradors and Labradoodles bark a lot?

No, these breeds don’t bark a lot when trained properly.

Dana owns a Sheepadoodle and a rescue merle Labradoodle. She has years of experience fostering dogs and has helped find homes for a variety of different breeds, both large and small! After seeing so many dogs end up unwanted and in shelters, she began blogging about different dog breeds (specifically Doodle dogs, since that’s what she knows best) to help people make informed choices when adding a new member to their family.

When Dana’s not brushing her Doodles’ hair (it takes a lot of time for two!) you can find her playing nose work games and fetch with her two amazing pups. 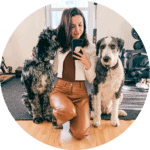 Hi! I’m Dana. I started Travelling With a Dog while living abroad and travelling with my Sheepadoodle. What started as a fun side project is now a resource where dog lovers from all over the world come to learn about different dog breeds, dog products and ways to incorporate their dogs into all of life’s adventures! I’ve since adopted a Labradoodle who joins us on all our adventures.

Sign up to our newsletter, the Hound's Herald, and get curated dog news sent to your inbox each week!

Travelling With a Dog is managed by Dana (human) and Dana’s dogs (Sheepadoodle and Labradoodle). Our goal is to help you learn how to safely bring your dog with you on life’s adventures and provide you with the comfiest Doodle apparel on the web!